getting personal with Nabokov

From Vladimir Nabokov, Speak, Memory. New York: Alfred A. Knopf, 1999, p.9: The cradle rocks above an abyss, and common sense tells us that our existence is but a brief crack of light between two eternities of darkness.

There is alway a question about the genesis of a project. Where did the idea come from/what were the underlying circumstances that led to the creation? …I’m going to answer that one first, yes, to get it out of the way, but more importantly, to establish a baseline—for an actor it might be akin to the question: “What’s my motivation?” Well, for Oculus I was motivated. When the world is slipping out from under your feet all kinds of motivations arise. I wasn’t suspecting to be making this book at this time, but it took hold and suddenly gained a momentum of its own until it obliterated all else. As creators we work under less than ideal conditions and situations… But we work and our work inevitably reflects the conditions and situations we find ourselves in. Sometimes we make the work simply because its all we can do in the face of things.

Thinking about the Nabokov quote was the start of a journey that lead to Oculus. There it is in black and white: A sentence that aptly describes existence. A metaphor of light staring straight back at me.

The real start of Oculus was neither inspiring nor auspicious. Difficult really. But who hasn’t been having a difficult time of it these last few years? And I can’t see that the world will getting more hospitable moving forward. The evidence counter indicates that things will be getting easier. But its also a matter of being up to the challenge, no? Let’s not go quietly into that night.

In true photography book perusal fashion let’s start with an except from the back of the book: some text from A Personal Note that is somewhat hidden in a fold-out tucked into an end page of Oculus”

“Oculus started with a question—a question about images and the way they function. It started with finding myself in a particular circumstance and confronting, what was for me, a particularly difficult time. Oculus is also a direct outgrowth of ideas I explored in my last book, A New History of Photography. In that book I discussed at length an observation that my pictures, usually made in a ‘documentary style,’ often reflected images I already had in memory. Oculus investigates the phenomena of images in memory as well, but looks at the subject from a very different perspective.

For me, this project started in March of 2009, while researching a talk for ICP in New York City. (See it in its entirety.) In that talk I quote an article that started with the opening lines of Nabokov’s Speak, Memory. The author connected the metaphor of light to consciousness and memory (New York Review of Books, Michael Greenberg, Just Remember This, December 4, 2008). I had been thinking about memory (and forgetting) more concretely around this time, as I was in the throes of confronting a troubling situation involving my two elderly parents. They had both been diagnosed with Alzheimer’s and were insisting on taking care of themselves in their own home, with as little help or outside intervention as possible. At first this seemed empowering: a bid for continued self-sufficiency. But they were isolated and argumentative. Still refusing most intervention as an attack on his autonomy, my father became increasingly dangerous to himself and to those around him (driving while functionally blind, for instance), as well as violent and abusive—never mind the house falling into disrepair and my mother’s diabetes, stroke and broken nose. Around this time, my wife was diagnosed with a serious viral infection, which she had been carrying from before we met, over 25 years ago. She began a debilitating course of treatment that would last nearly a year, with a forty percent chance for a positive outcome. The children and I were tested. Luckily, these tests proved negative. By this time, the photographic industry was fully into its wrenching, economically disruptive shift towards digital media. When the economy fell in the wake of the worldwide financial crises, business relationships I had cultivated (some for nearly 20 years) disappeared. Industries vanished. I hunkered down and moved my workspace to my home. Friends were having their troubles too. In that we were not alone. It felt like the solidity behind the structure was vanishing, but on the surface, much appeared the same. We took the kids to school, sent them on play-dates, and did the grocery shopping and the household chores. But there was a hollowing out. My wife’s hair filled the drain when she showered and she struggled greatly not to sleep through most the weekends, although we both still took great joy in our children and delighted in their energy and interests. We soldiered on. Let it be said that throughout, my wife missed not a day of work. It wasn’t all gloom and doom: We cooked elaborate meals for ourselves, and when my wife was up to it, we invited friends. But when our car was hit and destroyed while parked near our house, we didn’t bother to replace it. In retrospect it is of little wonder that I should have been so moved by the Nabokov quote. I saw an abyss opening up. I thought about the images I held centering on my peers, my family, my work and myself. I was struck with the realization that the images I held, the images in my head, had become separated from the reality they once portrayed. I was taken off guard that my images could be so defining—not only in relation to who I was and how I saw the people that I loved, but also how those images colored my perceptions, swayed my judgments and influenced my actions. I had to take stock; my images no longer held up. 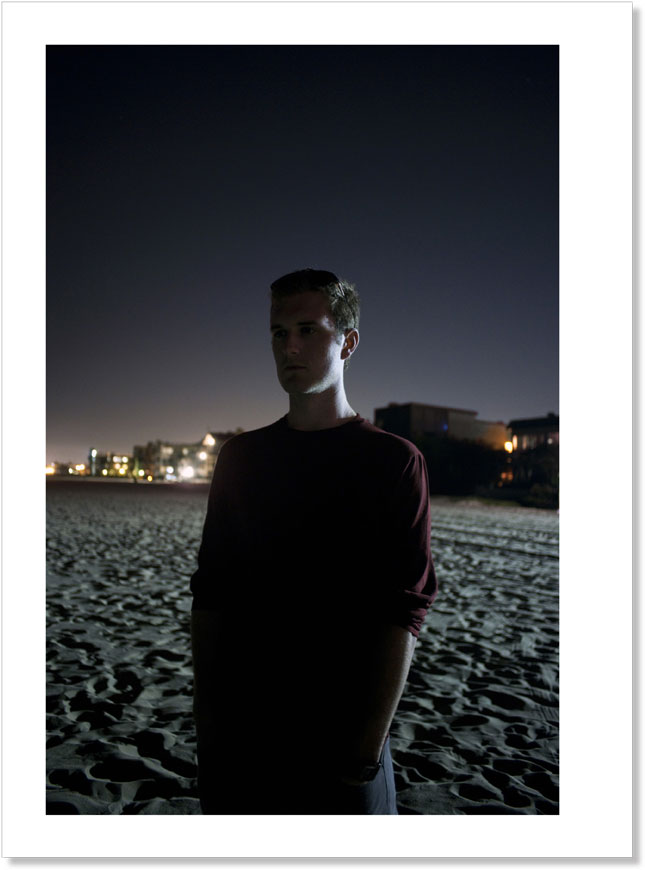 The first Image in Oculus.

Somnambulism: I started to make the photographs of sleeping children with the help of their parents while the Nabokov quote was firmly planted in the back of my mind. Meanwhile, the world, as I once knew it, had unraveled. I still acted as if things were as they had been. I was the sleepwalker moving through the bedrooms of these still and silent children, all tucked in their beds. Eventually, I came to realize that seeing was, in many ways, only ‘believing.’

To look at my wife and me, few would have guessed our difficulties. We kept quiet about what was going on, and it was easy to believe our world was on course. ‘Things’ looked pretty much as they—I was going to say ‘always had’—but that simply isn’t true—there was never an ‘always had.’  And as I write this I think: The images we use to describe our lives are legion; they are nuanced and layered as they mimic and mock life itself.

It is my hope that Oculus gives pause and becomes a vehicle to think upon the rôle that memory and metaphor play in constructing images we use to describe the fleeting nature of experience—and life itself. Attempts to unravel these essential mysteries illuminate what makes us most human.

My journey started when I compared my experience to a range of concepts both philosophical and anthropological, some current and some whose origins date to the earliest of antiquity. They all represent links in a chain of causality, of questions, of thoughts and ideas as old as civilization itself. And yet these voices were as illuminating and eloquent as any I had heard.

I didn’t come to this project lightly. I came to Oculus while thinking through difficulties I faced in my personal life.

We infuse the world we encounter with meaning, with social and symbolic significance based on the value we place upon representations we share. This, perhaps, is the irony of our conceptualizations: We make and share images so that we may know the world.

Oculus takes you on a personal philosophic journey that points beyond the shadow-play of images. It is a meditation on the nature of perception and existence in the gray light of this world.

Oculus, a photographic book about images, memory, and the metaphor of light.

Ken Schles is the author of Invisible City (1988; reprint 2015 and 2016), The Geometry of Innocence (2001), A New History of Photography: The World Outside and the Pictures In Our Heads (2007), Oculus (2011) and Night Walk (2015 and 2016). His work has been nominated for the Deutsche Börse Prize, exhibited by The Museum of Modern Art, noted by the New York Times Book Review, cited in histories of the medium (Parr/Badger, Auer & Auer, 10x10 American Photobooks) and issued by some of the foremost publishers of our time (Steidl, Hatje Cantz, Twelvetrees Press). They're considered “intellectual milestones in photography” (Süddeutsche Zeitung), “hellishly brilliant” (The New Yorker). Ken Schles’ work is included in private and public collections such as The Museum of Modern Art, The Rijksmuseum, The Metropolitan Museum of Art, Museo d"Arte Contemporanea (MACRO) Testaccio Museum, and more than 100 other museum and library collections world-wide.   Ken Schles is a NYFA Fellow. http://www.kenschles.com
View all posts by kenschles »
« testing, testing, one two three
making dummies »