We Like Lists Because We Don’t Want To Die (repost)

(Update 2/23/2016) I’ve been thinking about the passing  of Umberto Eco last week. His writings were an inspiration. In 2010 I wrote a piece quoting his essay on the nature of lists. It’s effortless for me to connect his discussion on the nature of lists to the act of photography itself. “Umberto Eco says we like lists because we don’t want to die; because it is what we do to bring order and comprehension to a world that touches on the infinite. Eco says he likes lists “for the same reason other people like football or pedophilia.” ”

When I was a young photographer I found his early writings on the semiotics of poetry an insight into my own practice. His book, The Open Work, seemed to intellectually encapsulate my urge to make images as I experienced and imagined the world.

…the crisis of contemporary bourgeois civilization is partly due to the fact that the average man has been unable to elude the systems of assumptions that are imposed on him from the outside, and to the fact that he has not formed himself in a direct exploration of reality. Well known social illnesses such as conformism, unidirectionalism, gregariousness, and mass thinking result from a passive acquisition of those standards of understanding and judgement that are often identified with the “right form” in ethics as well as politics, in nutrition as well as fashion, in matters of taste as well as in pedagogical questions.

—From The Open Work

Something to appreciate in our age of device driven social media platforms. 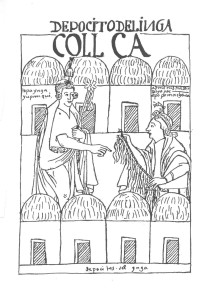 Umberto Eco says “we make lists because we don’t want to die, because it is what we do to bring order and comprehension to a world that touches on the infinite.” Eco says he likes lists “for the same reason other people like football or pedophilia.”

To describe something is to make a list. Most early forms of writing—even from a diversity of unrelated cultures—are devoted to lists (see Inca rope records “Quipu,” or clay tablets inscribed with Early Greek Linear B, as well as the earliest Proto-Cuneiform: they were, nearly exclusively, lists). Libraries are lists of books that reflect the mind(s) of the compiler(s). Art and culture are derived from lists and are generative of lists. The Internet is a list itself further refined through searches and “sub” lists that define things to us like Facebook ‘friends’ or oil spills.

Photography certainly is a form of list making. It says I was here, here and here. It gathers ideas and delimits those things from the surrounding infinite and it makes groupings through the order of things, which point us to ideas about something specific or ineffable. Series of images reinvest the singular list by repetition, further defining aspects of the list. Artists are known for series of typologies, which are basically just lists: the Bechers’s and their water towers; August Sander’s farmers; Blossfeldt’s flowers; photographs as arranged in Gerhard Richter’s Atlas (see the Atlas itself here)—these are, perhaps, the most obvious examples. But every photographer lays claim to lists. Photographers can be defined either by genres or obsessions—from portraiture to landscape to fixations with genitalia or the sky at night. Diane Arbus had her outsiders and Garry Winogrand had his women and his streets, Robert Frank had America and its icons. Commercial photographers get hired because they can be trusted to make images that are extensions of lists they’ve already made: food; cars; lingerie; celebrities; corporate CEO’s; etc.—until they become defined by the lists they’ve made. We define ourselves by the kinds of images we keep or identify with. We use lists to recognize and differentiate things from an infinite number of possibilities that something is not. Until there are so many infinite possible lists and things to put on those lists that the lists themselves compete with the infinite. Until the list itself becomes so large and undifferentiated that the culture that the list originated in and depends upon drowns in it.

Ken Schles is the author of Invisible City (1988; reprint 2015 and 2016), The Geometry of Innocence (2001), A New History of Photography: The World Outside and the Pictures In Our Heads (2007), Oculus (2011) and Night Walk (2015 and 2016). His work has been nominated for the Deutsche Börse Prize, exhibited by The Museum of Modern Art, noted by the New York Times Book Review, cited in histories of the medium (Parr/Badger, Auer & Auer, 10x10 American Photobooks) and issued by some of the foremost publishers of our time (Steidl, Hatje Cantz, Twelvetrees Press). They're considered “intellectual milestones in photography” (Süddeutsche Zeitung), “hellishly brilliant” (The New Yorker). Ken Schles’ work is included in private and public collections such as The Museum of Modern Art, The Rijksmuseum, The Metropolitan Museum of Art, Museo d"Arte Contemporanea (MACRO) Testaccio Museum, and more than 100 other museum and library collections world-wide.   Ken Schles is a NYFA Fellow. http://www.kenschles.com
View all posts by kenschles »
« In Splendid Isolation (repost)
Representation and Its Double (repost) »